An American in Ontario

This essay describes my experience sitting on the boardwalk at Toronto’s Woodbine Beach on Tuesday, September 22, 2015. I was visiting the city to attend a Blue Jays game and appreciate their transit, but I took the following hour or so out of the week to take in my surroundings. 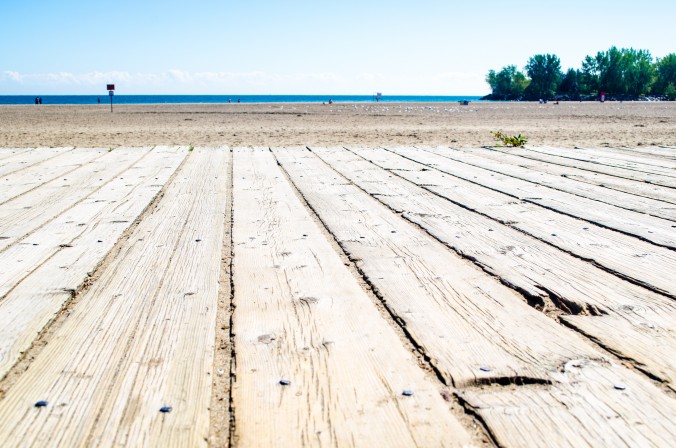 Woodbine Beach stretches gradually from the boardwalk to the water. Small waves break at the edge of the sand. A man navigates the shoreline on a paddle board. He loses his balance and falls on his back into the shallow water. My attention is reigned in as a woman jogs past my bench on the edge of the boardwalk. She wears a sports bra that is a bit too loose and appears as exhausted as the skin that covers her upper arms. She passes more slowly than expected through my vision from left to right. A black and orange butterfly follows her, fluttering in the light breeze.

I remember a Salinger quote: “She wasn’t doing a thing that I could see, except standing there leaning on the balcony railing, holding the universe together.” What would that look like? Is there an equally-intriguing metaphor to describe the gulls on the beach?

For a September in Toronto, the weather is perfect. My right arm is sun-soaked, my left wind-swept. My brain combines the two sensations into a single feeling of comfort. I commend the shade tree underneath which I sit on a job well done. Based on my arm’s differing experiences, maybe this is the first time it has been called a “shade tree”.

I cross my legs, right knee over left. Other people who do this seem to be having profound thoughts. Is it causation or correlation? I hope to soon know. I feel no immediate effects, but I tell myself I’m in no hurry. Maybe Eckhart Tolle crossed his legs right knee over left during his two years of sitting on park benches.

A blacktop path runs behind my bench, complementing the boardwalk and beach to complete a 360-degree theatre of urban activity. A couple jogs by on the path, the man pushing a stroller. The woman is going a hair past her comfortable jog-and-talk speed. She exhales deeply between a series of two-word exchanges.

An elderly couple saunters to my right, a bit of distance between them to accommodate their differing gaits. They smile at each other. Each says a single word. I hear neither.

A man wearing a Blue Jays baseball cap strides briskly to my left. The logo which adorns his hat offers a pleasing mix of retro and modern vibes, the two shades of blue that form the jay contrasted nicely by a red maple leaf. Countless fans at the baseball game last night sported the same logo. If I weren’t visiting the home diamonds of all thirty teams in Major League Baseball, I may have bought one. But because I am flying across the country (now countries) to check off my list, I now get to sit on this bench not checking off a list. I intend to achieve spontaneous mindfulness at the beach I discovered on TripAdvisor in between checking my Visa balance and my American Airlines flight details more than a week ago.

Another butterfly flutters several meters in front of me. Then another. They also fly left to right. I look to see which way the wind is blowing. Towards me.

Who will I describe this moment to first? Why do I want to tell someone about this moment? When should I get lunch?

Too-loose-sports-bra jogs by again, this time to the left. A boat takes advantage of the lack of swim ring and drives parallel to the shore. It moves quite near the sand, and I wonder how soon before it is too late a beached whale is aware of its fate.

I don’t see the CN Tower to the left. I remember it is actually to the right. I don’t see it there either. Maybe it’s better this way. 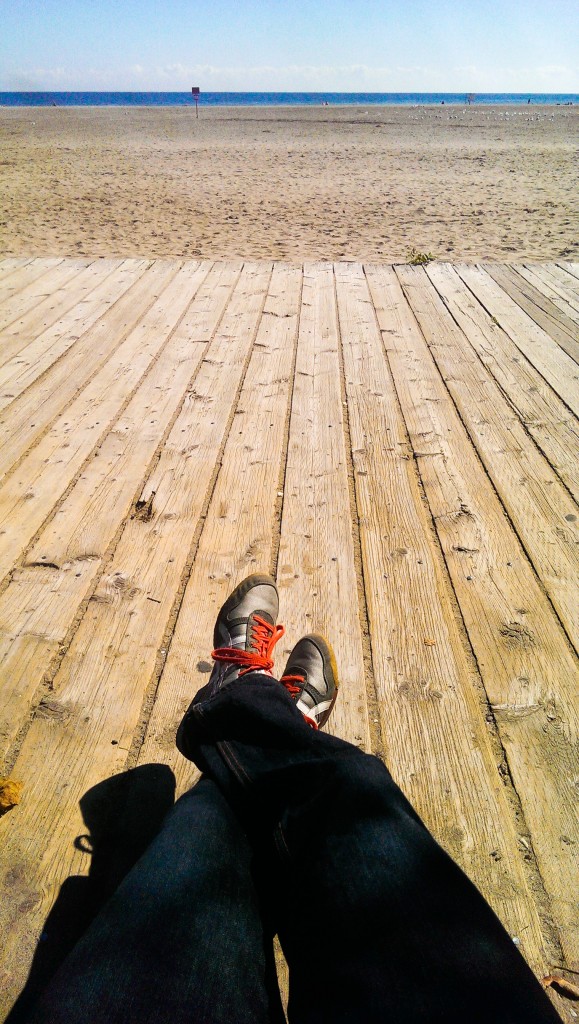 Two young women pass. Both have straight hair that reaches the top of their backs. Both carry leather bags slung over their left shoulders which rest just behind their right hips. Both wear denim pants which stop several centimeters above their ankles. Both wear sandals which straddle the line between fashionable and functional.

The effect of crossing my legs begins to reveal itself. I can’t feel my right foot.

A dog with a head as small as the rest of its body is big pulls its owner down the jogging path behind me. Who is walking whom?

A mother ambles to my left pushing a stroller with a child onboard. Their smiles are similar, but the child’s does not last. She pushes herself onto her arms and cranes her neck towards the direction from which they came. Maybe they won’t need a stroller next time they visit the boardwalk.

A white pickup truck drives along the water’s edge. The beach is not topless, so maybe the driver chose this vehicle over a convertible. Or maybe the beach trash patrol completes their rounds approximately midday on Tuesdays.

My window for unstructured time is nearly finished. Will I go to a baseball-themed brewery next or repeat this mindfulness exercise at a city overlook? Which should I do first?

The similarly-dressed women pass again. I now remember I saw them on the streetcar. The one whose sandals are slightly more fashionable than functional has her toenails painted bright pink. They walk in the direction of the beachside cafe to my right. Maybe they are about to sit for some gelato.

I remember I didn’t get carded at dinner last night. Then I remember I ordered poutine and a water.

Is what I feel right now “peace”? It feels more like the absence of anxiety. Maybe those are actually the same thing.

A man with a head of thick white hair walks next to a woman. She is of similar age and complexion, though the dark shade of her hair still complements the tones of her visage. His black leather loafers, faded denim jeans, and worn green and white shirt would not have been out of place on this boardwalk twenty-five years prior. The man’s voice exudes confidence and direction, unlike others on the boardwalk on this day. Maybe he misses conducting his daily business. Or maybe his wife is hard of hearing.

I mentioned this beach to my seat neighbor at the game last night. “I hope you have good weather,” she said. She didn’t say whether the setting is good or bad, only acknowledged its presence. Maybe this moment is the same.

A young couple strolls to my left. Their small dog bounds in front of them, its curly black hair bouncing with each step. Both the man and woman have shirts of tartan pattern with large squares of color. Hers is red and black and she wears it loose and open. His is blue and black and rests on his left shoulder. Maybe she saw a photo of a matching couple on Pinterest this morning and encouraged him to recreate it with her. Or maybe she is cool and he is warm.

I shift on the bench. Have I answered any of my questions? I feel my American passport in the front pocket of my jeans. An image of Gertrude Stein appears in my mind, but I remember I have a booking for a return flight. The last question I asked is the first whose answer I know.

Three middle-aged women dressed for business make their way from the right. One of them is learning the uneven nature of the boardwalk. The handle on her roller backpack is much too short. She reaches down to pick it up for a second time. I stand and walk towards the city.

The next day, I would visit the Toronto Islands and enjoy the stunning view below. On the boardwalk, however, it was just me, the sand, and endless ocean.

Do you have any mindfulness exercises you do while traveling or at home? Let me know in the comments below or contact me. 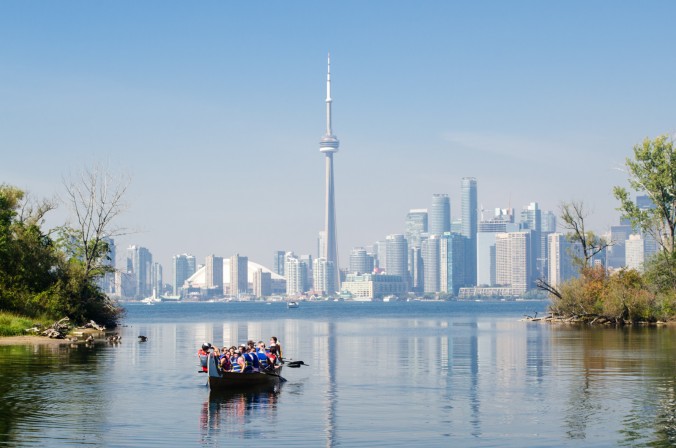