What baseball fan hasn’t dreamed of single-seat ride between Seattle and Washington, D.C. to catch a Mariners/Nationals doubleheader? The Baseball Transit Authority’s new stadium subway is here to ferry you between ball parks faster than Rickey Henderson could slide into second.

You may notice there are only 25 stations for the 30 MLB teams, with multiple teams combined into single transit stops in Chicago, Los Angeles, New York, Washington, D.C./Baltimore, and San Francisco. Now may be a good time to say: the map is entirely fictional. You can rest assured no fans heading to an Orioles game will be dropped off halfway between Nationals Park and Camden Yards. Best of all, the Baseball Transit Authority system is entirely underground. An original revision did not contain the route between the Twins and Mariners, but fortunately for baseball-transit-fiction-land, Rob Manfred developed some creative financing schemes and was able to complete the entire subterranean Northwest Corridor on-schedule and under-budget. 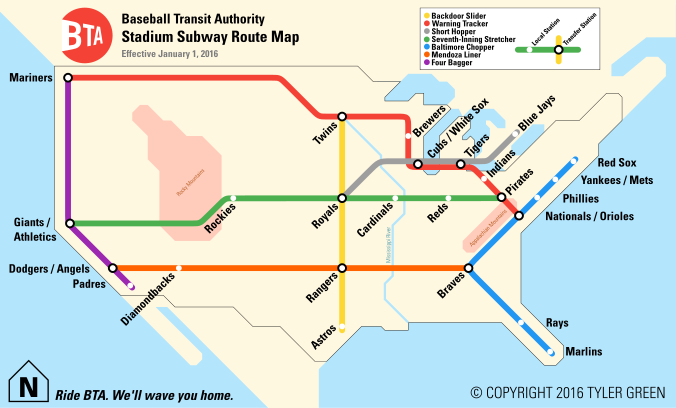 The Baseball Transit Authority prides itself on performance. While “I don’t care if I never get back” is the chorus of its ridership, this iron rail is more reliable than Cal Ripken, Jr.

Joking about highly-unfeasible transit systems aside, I learned loads about the incredibly-useful vector graphics to produce this map! How can you not be a fan of an infinite-resolution image? Raster graphics (of which JPEG is one format) define images using an array of pixels, whereas vector graphics define images using an XML list of shapes, text, and colors. While you can write the code yourself and understand SVGs (scalar vector graphics) 110% better as a result, fortunately this is not necessary. Cam Booth of the Transit Maps blog recommends the industry-standard Adobe Illustrator to create vector transit maps. For beginners and designers on a budget, Inkscape is a capable alternative. Best of all, it’s free to download! I learned about shapes, grids, paths, and nodes, and was quickly able to apply them to my project of confusing baseball and transit fans everywhere.

Click here to download the map as a PDF. And, as always, let me know about any recommendations you may have!

Don’t forget: next time you head out to the ball park…