A Snowy Monday on Transfort

Neither snow nor rain nor heat nor gloom of night stays these couriers from the swift completion of their appointed rounds.

The unofficial creed of the United States Postal Service flashed into my mind on my bus ride home today. The clouds rolled in and dropped more than a half-dozen inches of snow on us Fort Colanders (Fort Collinizens? Fort Colonials?) over the course of the day Monday in Northern Colorado. Yet through it all, Transfort service stayed constant. Mostly.

As I first noticed during a large dump of snow a few weeks back, the articulated MAX buses are not run in the snow. The trend continued today! Besides an opportunity to ride #MiniMAX (full post on Transfort bus spotting coming soon), riding the 36 foot and 40 foot members of the fleet are a fun and cozy change. We only slipped a few times during my morning commute and I didn’t have to leave the parking lot with my windshield wipers standing erect like many of my coworkers. Bus in the snow = win! I warmed up with some Coloradoan/Russian coffee from Dazbog and arrived to work giddy from the winter weather. The ride home was more….interesting. 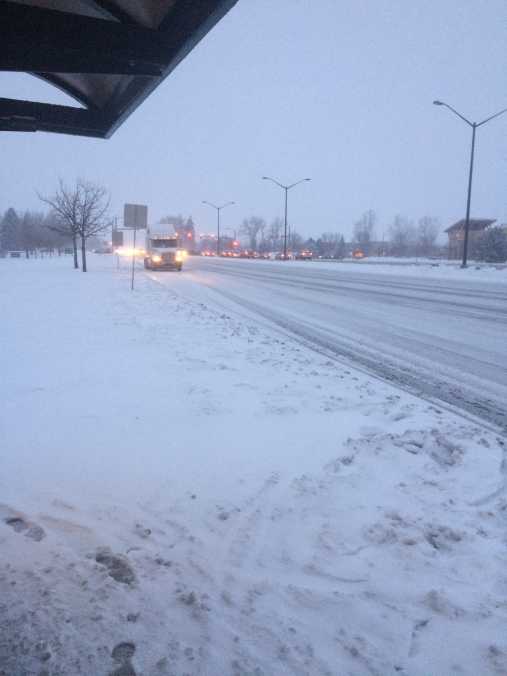 My ride home started out as bleak as midwinter.

After waiting about 10 minutes past due for the Route 16 bus, I checked the Transfort app to see where it was. Yes, this arguably should have been my first step, but the buses are generally on time and this isn’t required. I saw no westbound bus on the map, but there was an eastbound 16 that would eventually wrap around to me. However, I was getting cold, so I made the snow-taneous decision to run across a six lane road and through a very-snowy-and-never-sidewalked area of grass to catch the bus at the next stop. My plan was successful! 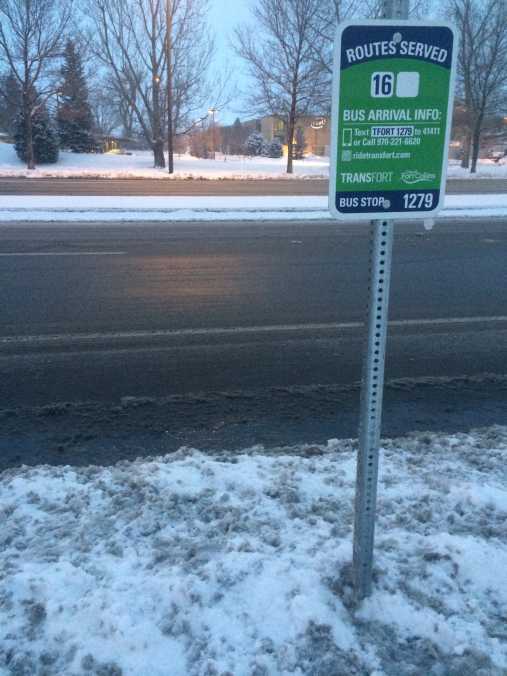 Can you see why the Fort Collins Public Transit Action Group is trying to get more consistent snow removal at bus stops?

Aside: I would have appreciated for Transfort’s Twitter account to be used to announce any service changes or lack of due to the snow. I can understand if you don’t have alerts as detailed as the NYCT Subway, but I would have liked at least a cursory notice that the buses are operating today. The announcements they do make via Twitter are very helpful, but I think running a more interactive account could be beneficial to everyone. Regardless, I have been impressed with the real-time data through their app!

After completing the full loop out to the Harmony Transit Center and back, we made our way to the South Transit Center (STC). There was a snow clearer wearing a “TRANSFORT SUPERVISOR” jacket, so I took the opportunity to ask him about the articulated MAXs’ absence when flurries start to fall. He explained that the Mason Corridor surface has a crown and the back section of the buses can slip when the roads are icy. He sent me off to board the short MAX with something along the lines of, “Don’t want to take any chances with your safety!” What a guy!

I’m happy to have an explanation for the fleet switch purely out of curiosity’s sake. However, I still find it odd that there was a $200,000 annual line item labeled “MAX/BRT Snow Removal” in the 2015-2016 Fort Collins City Budget, but that isn’t enough to always run the buses you bought for that guideway. Any rate, I commend Transfort for their overall service in the snow, as they did indeed get me to work and home safely!

On the northbound MAX ride, I enjoyed chatting with a University of Arkansas alum! We sped through about eleven topics on the ride, including Tour de Fat, the Clinton Presidential Library, and that Memphis exists. 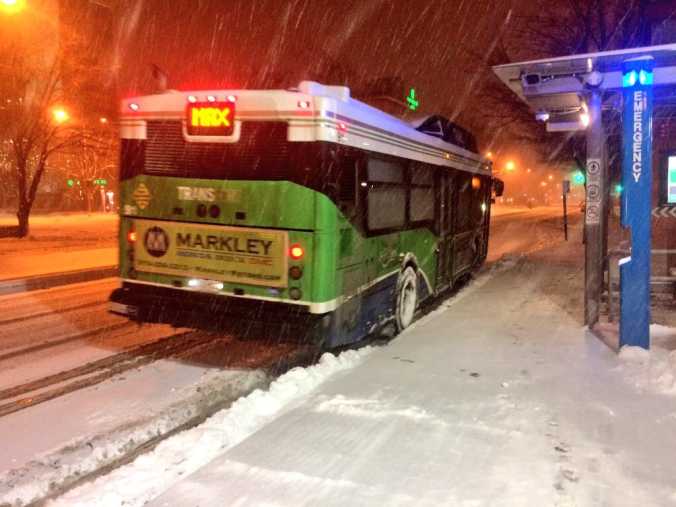 Neither snow nor rain nor heat nor gloom of night could slow this Transfort bus. 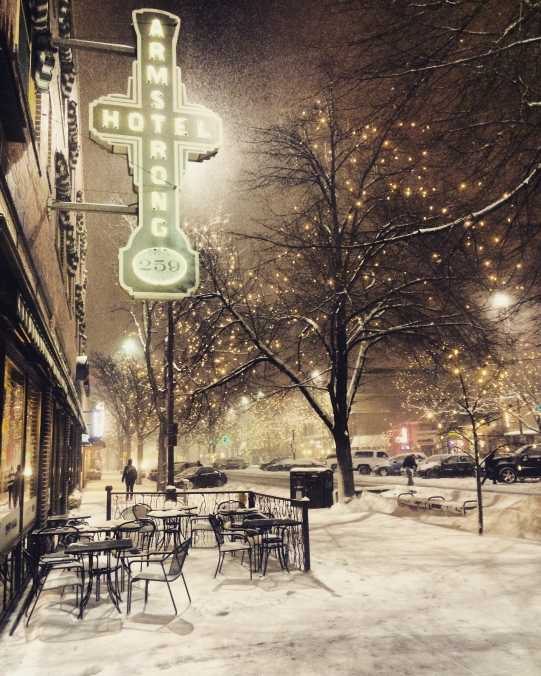 We only ran into one curb and the driver managed to drop everyone at the proper stops even though the cord wasn’t working! I always love riding the bus, but days like today where about ten interesting things happen get me even more excited. I couldn’t stop smiling my whole walk home from the snowy bus adventure! I’ll leave this post with what my friend Colby, of #RTDDay fame, once said, “I get the bus thing. You’re taking something that’s normal and you’re turning it into something that’s magical.”

I recently discovered this awesome visualization on bus bunching! It’s mesmerizing to watch the “vicious cycle” of a bus being delayed for some reason, then being even more delayed after having to board a larger number of waiting passengers at the next stop.

I’m working on a project similar to this transit frequency visualization from Transitland. I’ve just about completed the Ruby side and learned lot about Ruby Gems and GeoJSON in the process! All that’s left is getting the hang of Mapbox to make a flashy result. I have already looked at the results in QGIS and that would make a suitable platform, but I’m excited to get more comfortable with Javascript while using the mapping service I  noticed is now used by The Weather Channel. No, my project will not address the looming L train crisis, but I hope it will still be insightful!