A Ruby Gem for GTFS to GeoJSON Conversion

I published my first Ruby gem: gtfs-geojson! You can view the source on GitHub. gtfs-geojson is a Ruby utility to convert a GTFS feed to a GeoJSON file. It’s a simple endeavor, for sure, but I’m pleased with what I learned along the way.

Let’s start out with some before-and-after views of the data. These images were created using QGIS, OpenStreetMap, Transfort’s GTFS feed, and the gtfs-geojson library. 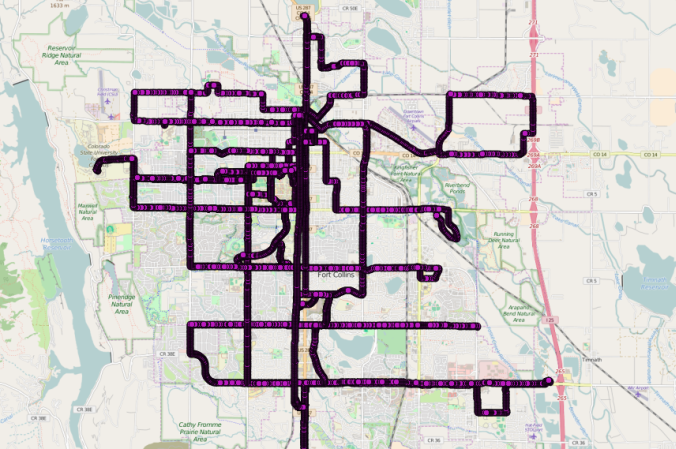 This map displays the shapes.txt file from Transfort's GTFS feed loaded into QGIS. The seemingly-inconsistent shading on the lines is because there are no lines at all; each "line" is made up of a sequence of points. Each point contains a route ID and is ordered relative to the other points in its route by a point sequence value. 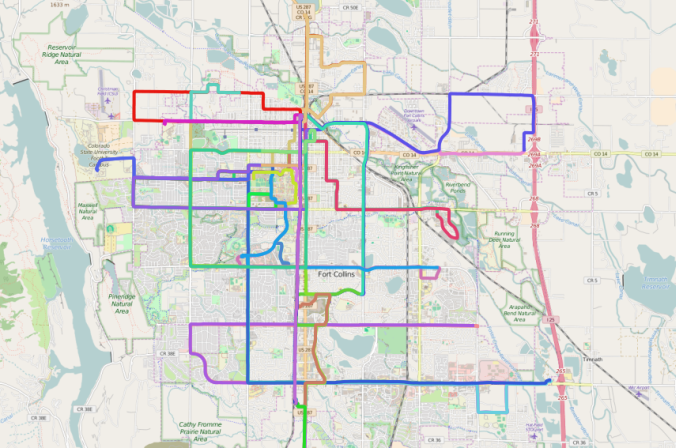 After running the GTFS feed through gtfs-geojson, you now have a GeoJSON file whose features are each route from the original feed. I used "Categorized" styles in QGIS to quickly apply a unique color to each route.

As with most transit projects, the input to gtfs-geojson is a GTFS feed. GTFS is the standard format published by transit agencies worldwide to make their routes, stops, and even fares usable by developers. The data is a series of comma-separated text files. To validate a GTFS feed, I used an existing gem. gtfs will fail gracefully if the shapes.txt file is not present, which is the only file I actually need for the conversion to GeoJSON.

gtfs-geojson implements the same algorithm as the “Points to path” QGIS tool I used when looking at Transfort bus data. The main trick is that the points within each route ID must be sorted by their point sequence value. Several other QGIS plugins I tried did not do this correctly, so don’t forget this if implementing this yourself!

While QGIS tools output shapefiles, gtfs-geojson produces a GeoJSON file, which is a JSON stream with geospatial points and polylines data served up in a standard format. I have previously loaded GeoJSON files in Mapbox applications, and they are also useful in a GIS context. The following three lines will load the library, validate the GTFS feed, convert its shapes.txt file to GeoJSON format, and write the GeoJSON to a file.

That’s it! Let me know if you have any suggestions! The README on the GitHub repo gives installation instructions.

The most valuable tip I learned while creating this gem was the use of the $RUBYLIB environment variable. This isn’t necessary when installing a gem onto your system using bundler, but it is extremely helpful during development. $RUBYLIB lets you specify the path searched when the require keyword is used. To add paths dynamically to $RUBYLIB, you can push items to the $: array. $: is shorthand for $LOAD_PATH within a Ruby program. My require_relative days are over!

If you are considering writing your own gem, I highly recommend RubyGems.org’s “Make Your Own Gem” guide. It is comprehensive and just generally fantastic.

I plan to use gtfs-geojson in a Rails project in the future. And speaking of gems, I’ve also been dabbling on a Ruby API client for Transitland. I hope to have more to share on both fronts soon!

Until then, ride on!

Have any transit projects to share? Let me know!