A few weeks ago, I was playing around comparing the MTA fares figures against annual inflation. The results initially seemed like some solid clickbait: “MTA Fares Rise Twice As Fast As Inflation.“ I showed one of my coworkers the graph and his reaction was interesting, something along the lines of, “Oh, so now they’re just raking in the money?” Well, not quite. Transit fare increases are a complicated topic and his misunderstanding is 100% justified. I decided to delve deeper into the topic. 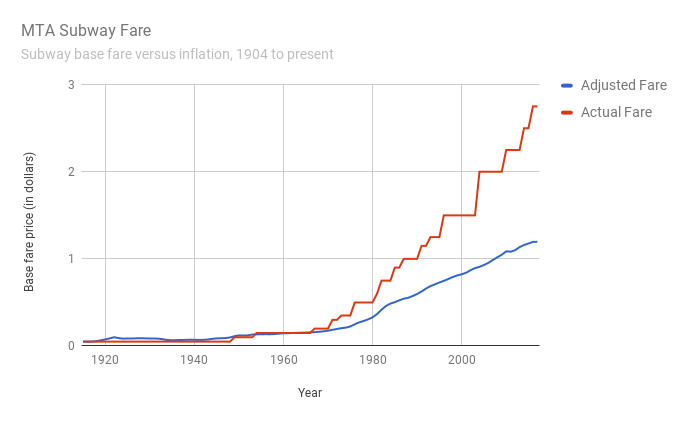 At this point, I’m going to pause and share the link to my notes and data for this post. They contain all my sources, accessed mostly via the TimesMachine, sorted by decade and which fare increase they correspond to. Since the IRT subway opened in 1904, the subway fare has increased the base subway fare 17 times. The document resembles a 10-car train rumbling by in that it seems to never end. I try to capture the highlights here!

What was the original fare?

When New York City’s first subway opened, the Interborough Rapid Transit system in 1904, the fare was 5 cents. In spectacular fashion, this lasted all the way until 1948, when Mayor William O’Dwyer increased the fare to 10 cents (a 100% increase!) because the artificially low subway fare was beginning to hurt the city’s schools and hospitals. Doubling the fare meant less city subsidy was required to keep the now-city-owned transit system running. Prior to 1940, the IRT and BMT subways (today’s numbered and L, J, M, Z, N, Q, R, and W lines) were privately owned and operated, so the argument against increasing the fare was that it would hurt working class people and line the pockets of private investors of the rail companies. (These investors were referred to as owners of “traction securities,” which makes me chuckle.)

Why do fares increase?

The simplest explanation for fares increases is to close a budget deficit. The New York state legislature requires that the MTA run a balanced operational budget. However, fares do not cover the cost of providing transit service in New York City (or anywhere in the United States for that matter). In 1982, fares for MTA’s modes (subway, bus, and commuter rail) covered 55% of its operational budget, and this is high by US standards. Since 1968, when the MTA consumed Robert Moses’ Triborough Bridge Authority*, cross-subsidies from toll revenues have also supported the city’s transit. The rest is made up through a combination of federal, state, and local subsidies, the amounts of which have varied greatly throughout the decades. That subject is worthy of many, many posts on its own, and is the reason why the fare price versus inflation graph is not the complete story.

For example, the 1995 fare increase from $1.25 to $1.50 was the first 20% rise since 1984. In those 11 years, there had been 3 fare increases, but their effects had been limited by additional contributions from the Mayor or Governor. When costs of providing service rise and aid stays constant, the fares must go up.

What started the rises?

As New Yorkers today are used to biannual fare increases, it’s hard to imagine a time where the fare had literally never been increased, and had stayed the same for 44 years. Several things were changing in the years following WWII: while the rise of the automobile is often cited and was certainly a huge contributor to reduced transit ridership, the 40-hour work week hit the Transit Authority’s** budget hard. If your workers can only work 40 hours, you are either paying more overtime, or benefits to more workers. A five-day work week also meant a less reliable ridership stream on day six.

Who sets the fare?

Today, the subway and bus fare is set by the board of the MTA. However, the reality is often more complicated. The New York Times explains the political nature of the fare well (farewell…hehe) in 1989, “Technically, the M.T.A. can approve fare increases without the agreement of lawmakers. The Legislature, however, controls the authority’s huge capital plans, giving it strong influence.”

Unsurprisingly, the fare has been featured in many political debates. John Hylan famously declared the nickel fare ”the cornerstone of the edifice which we call New York City” and a “property right” during his 1921 re-election campaign. More recently, after state legislatives retreated from a $1.25 fare to only $1.15 in 1990 (which was formed through a 1987 agreement with the unions, Governor, and Legislature), many suspected it was a political stunt.

The original 5 cent fare was set by the Rapid Transit Acts of 1891 and 1894, both pieces of state legislation. From 1924 until 1953, fare increases were the responsibility of the New York City Board of Transportation, from 1953 to 1966 the New York City Transit Authority, from 1966 to 1968 the Metropolitan Commuter Transportation Authority, and since 1968, the Metropolitan Transportation Authority. Each of these organizations has their own complex history, but the takeaway should be that the fare was controlled by the city until 1953, but since then has fallen under a public authority with no direct political control.

Every increase is a story

While subway and bus fares are the same today, this was not always true. In 1948, when the subway fare increased to 10 cents, the “surface” fare was 7 cents. A transfer fare was sold for 12 cents, provided both a subway ride and surface (bus or streetcar) ride. Another technical aspect of the fare is today’s “bonus,” or the amount of “free” cash value added to a MetroCard when purchasing a value-based card (as opposed to time-based). Today, the bonus is 5%, but was previously 11%, 5%, 7%, and 8%, all in the last decade. This, combined with the difference in relative increases in the price of passes (day, week, or month), is one of the levers that the MTA controls when setting fares today. Until MTA adopts fare–capping, all of these parameters will continue to be debated by the lawmakers representing the rich and poor, upstate and downstate, urban and suburban riders of the transit system.

Since the 1970s, two fare increases have been accompanied by increased state support through new taxes. The largest of these came in 1981, at the insistence of then-chairman Richard Ravitch. When the MTA board voted to increase fares from 60 cents to 75 cents on July 2, 1981, they also approved a rise from 75 cents to $1.00 to take effect two weeks later unless more state aid was provided. Ravitch describes in his 2012 book “So Much To Do” how this plan was devised to strongly encourage the state legislature to pass a tax package to provide operational assistance to the MTA, which they did on July 10, nullifying the second increase for the time being. This tax package is still in effect today.

The Great Recession created another “interesting” fare increase climate in 2009. MTA’s state funding is largely through dedicated tax funds which are susceptible to fluctuations in the larger economy. A commission led by Richard Ravitch recommended a MTA-region payroll tax and tolls on the East River and Harlem River bridges to shore up the MTA’s budget deficit. The Payroll Mobility tax was created, and vehicle registration and parking fees were increased in March 2009. This was all to limit the fare increase from $2 to $2.25, after increases to $2.50 or even $3 were considered. Unfortunately, the Z and W routes were eliminated (though the W was brought back in 2016) to complete the balancing of the budget.

A major logistical aspect of fare increases changed 20 years ago. The 1997 introduction of MetroCard meant that riders no longer had to exchange tokens. On the day that a fare increase took effect, the morning rush hour was often expected to be an hour longer due to long lines of token exchanges. The Transit Authority also didn’t need to order millions of new tokens, or keep around old tokens to use at the next increase. (MTA did not adopt the USPS-like idea of Forever Tokens.) MetroCard also allowed for time-based passes. The best approximation tokens could achieve to this was bulk discounts, which is the same idea as today’s cash value “bonus” discussed above.

Other Transit Authority expenses that drive each increase are labor costs and debt service. In the 10 years prior to 1953, the Transit Authority’s payroll tripled. As the MTA has taken on more debt since the introduction of the first capital program in 1982, more of the operational budget is consumed by servicing this debt. Like many of the thornier issues casually mentioned in this post, labor costs and debt will be the topic of many, many, many future posts.

The MTA board has committed to biennial fare increases as part of the 2009 recovery package. While 2017 did not have a base fare increase, the weekly and monthly fares went up in January of this year, as they did in late-2010. A new fare payment system is on the horizon***, and MetroCard is scheduled to be phased out by 2022.

Besides the coming technological upgrade to the fares, MTA financials continue to be at the front of the news. Governor Cuomo recently announced support for congestion pricing and, a week later, Mayor de Blasio claimed he ‘does not believe’ in it. The Mayor also supports reduced fares for certain groups, but only if it is funded through a millionaires tax. The present discussion is a valuable one, where we consider which groups in our society are paying for our transportation system (yes, even the road users benefit from a better subway and bus system). Much of the state support received by the MTA originates in the city as it is paid by its downstate constituency through regional sales and payroll taxes. Strong arguments can be made for more direct state subsidy, those not tied to dedicated tax funds paid primarily by residents of the city. Regardless, we’ll likely be paying a bit more in 2019 to ride the subway, the system which is the brunt of many jokes and New Yorker covers, but which supports life in this incredible city day in and day out. Let’s make sure we take care of it.

*** The construction award for the New Fare Payment System is mentioned on page 77 of the Capital Program Oversight Committee Meeting from July 2017.